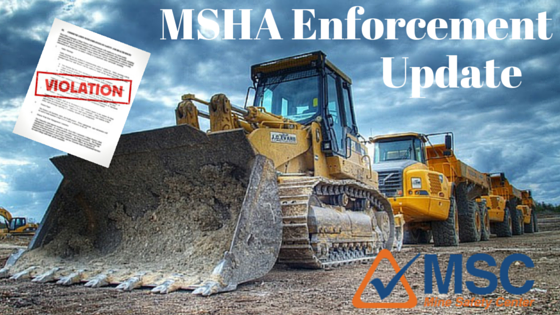 Since 2011, 16 metal and nonmetal miners have died in accidents involving machinery and non-haulage mobile and quarry equipment, and many more have been seriously injured or disabled.  Of the 16 persons fatally injured, six were supervisors and three were contractors.  Seven miners died when they were struck by the equipment they or a co-worker were operating, four miners drowned when their equipment ran into or overturned into water, and five more died when they were caught in crushers, on drill steel or between reciprocating machinery.  The equipment involved represented a wide variety of mining equipment: drills, dozers, excavators, graders, dredges and crushers… MSHA plans again this month to continue walk and talks at mine sites and again enlist the partnership of mines, miners and mining industry groups in the effort to raise safety consciousness.

I’ll repeat that, “drills, dozers, excavators, graders, dredges, and crushers.” MSHA is essentially announcing close inspections of all machinery and equipment used in the process of mining. Their stated purpose is admirable as always, but you have to consider MSHA’s previous methods of “raising awareness.”  Recent history tells us it will likely involve increased inspections, citations, and fines.

This is the 5th announcement of increased MSHA safety enforcement in just the past few months. MSHA has announced an enforcement “surge” on M/NM mines which includes transferring inspectors from coal to M/NM, an emphasis on confined spaces and Lock Out, Tag Out, Try Out procedures, and Part 50 injury reporting. They have also been given funding to hire more MSHA inspectors.

Merrifield goes on to offer some best practices:

MSHA standards require operators to maintain control of mobile equipment while it is in motion, and to operate at speeds consistent with conditions of mine roadways, tracks, grades, clearance, visibility and traffic.  When mobile equipment is not in motion, it must be stopped in a safe location and when not attended, parked in a manner that prevents it from moving and becoming a hazard to the operator or other miners.  In addition, mine supervisors and equipment operators need to continuously monitor and maintain roadways and berms and operate mobile equipment in a controlled, safe manner.  When operating excavators, position the as far from the water’s edge as feasible on firm, stable ground.  Don’t traverse unstable ground above a highwall and stay off and away from over-steepened stockpiles until they can be made safe.

You can download today’s Machinery and Equipment Hazards Alert here.

Considering the number of recent MSHA safety enforcement alerts, 2016 is going to be a very busy year for mine managers, safety professionals, and mine contractors. Prepare your company for MSHA compliance in 2016. MSC expert and  Ex-MSHA inspector, Kim Redding, has a free MSHA compliance video series.  Learn MSHA tips from a former MSHA inspector. 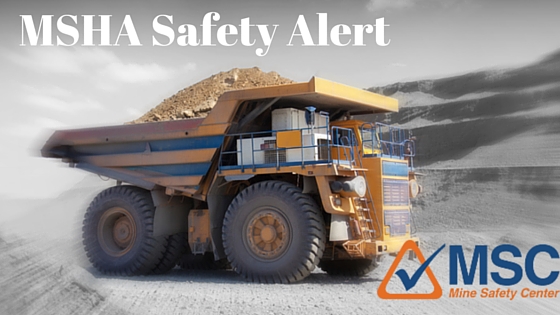 This morning brought another MSHA safety alert involving a serious accident. The incident happened at a Surface Limestone operation where “a miner was operating an empty articulating haul truck. The driver lost control on a downhill grade and overturned. He was hospitalized with serious injuries but survived, likely because he was wearing his seat belt.” The injured driver will be in our thoughts today.

MSHA has been very active recently. In just the past few months they have announced an enforcement “surge” on M/NM mines, an emphasis on confined spaces and Lock Out, Tag Out, Try Out procedures, and Part 50 injury reporting. MSHA safety alerts have also been issued with increasing regularity. 2016 is shaping up to be a busy year.

The best practices in today’s MSHA safety alert don’t just apply to haul trucks. Customers and contractors driving on mines must also be made aware of mine safety best practices. This can be done during the initial Site Specific Hazard Awareness training. However, making contractor safety training a consistent routine will improve safety for everyone on the mine. When a company resubmits their MSHA training paperwork is a convenient time for this training, but more often is always better.

If you need resources for this training, you can go to CalCIMA’s website for free driver safety training materials. You can also use this free truck safety training video produced by MSC and CalCIMA. 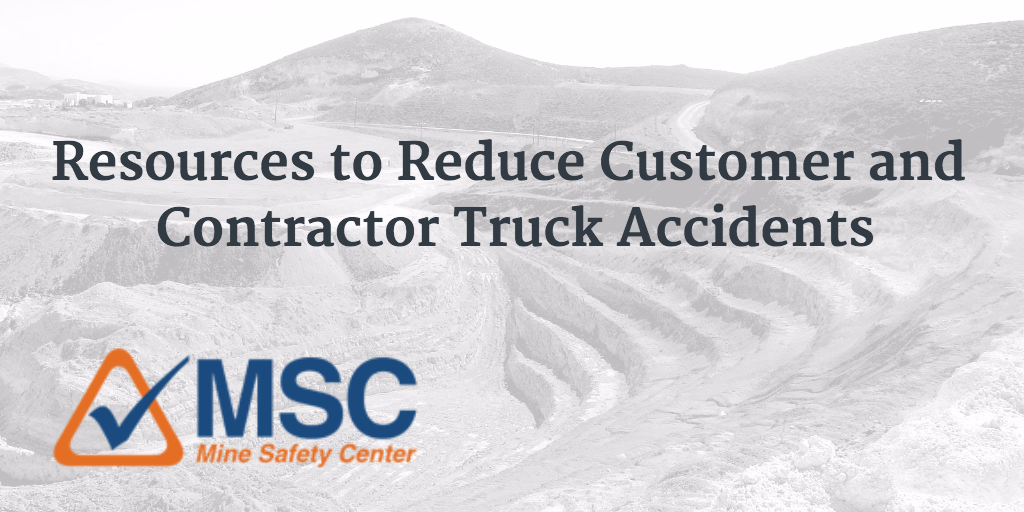 Mining Truck Accidents Can Be Reduced

Following established rules and procedures is essential to reduce mining truck accidents and other unsafe incidents. These rules and procedures also apply to customers and contractors but are sometimes forgotten because these drivers are not on a mine as often as mine employees.

The Mine Safety Center has teamed up with CalCIMA to produce free materials to teach a few simple ways to stay safe on a mine. “The training materials include signs that will warn drivers of the most common customer truck hazards at mine sites,” said Mike Herges, safety manager at Graniterock and a co-chair of CalCIMA’s Safety & Health Committee. “We hope mine operators embrace these warning signs and they become the standard at all mines,” added Herges. The training materials include a video, postcard, and brochure that incorporate the warning and caution signs. They provide operators a variety of formats to reach drivers, brokers, and fleet managers.