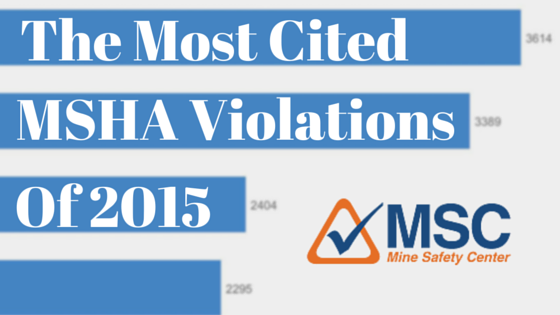 How To Avoid The 5 Most Cited MSHA Standards of 2015

Ever finish a Mine Safety and Health Administration (MSHA) inspection with your head spinning? You feel confident when the inspector arrives. Then the notepad comes out. Did the experience leave you with questions? Saying to yourself “How did we get hit for those MSHA standards? We run a good operation. How did we get so many fines?”

Obviously, MSHA citations are costly. But on top of the financial penalty, there are more subtle costs. Unlike money spent on training or workplace safety improvements that can prevent citations, MSHA fines aren’t tax deductible. MSHA citations also cost your company man-hours through additional inspections and time spent contesting the tickets. Finally, S&S citations affect your POV status, which can lead to even more fines if MSHA determines you have a Pattern of Violations.

Knowing where MSHA inspectors are looking, what they’re looking for and what they’re citing is valuable information. This information can give your team a path to go above and beyond your standard work safety and inspection procedures in targeted, high value areas.

That’s why I took a deep dive in the data provided on MSHA.gov. Let’s examine which Metal Non-Metal (M/NM) MSHA standards were cited most in 2015 and compare them to 2014. We can begin to see where MSHA is devoting their time and resources.

Spoiler: It doesn’t always match their many enforcement announcements. I know, you’re shocked.

The Most Cited M/NM MSHA Standards of 2015 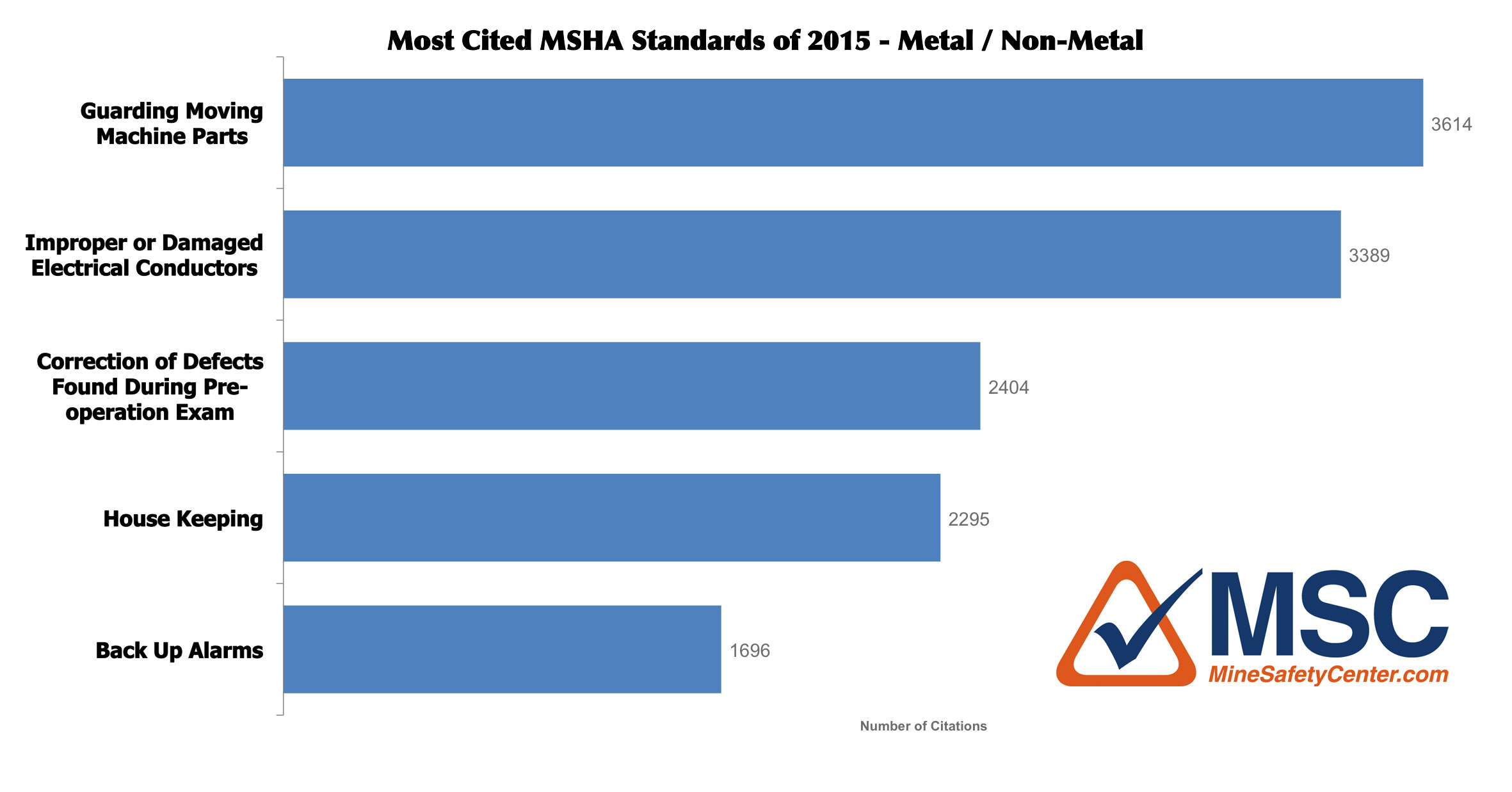 As you can see, Guarding and Damaged Electrical Conductors are far in front of the pack. That’s even more apparent when we look at the Top 15 standards in the next graph. 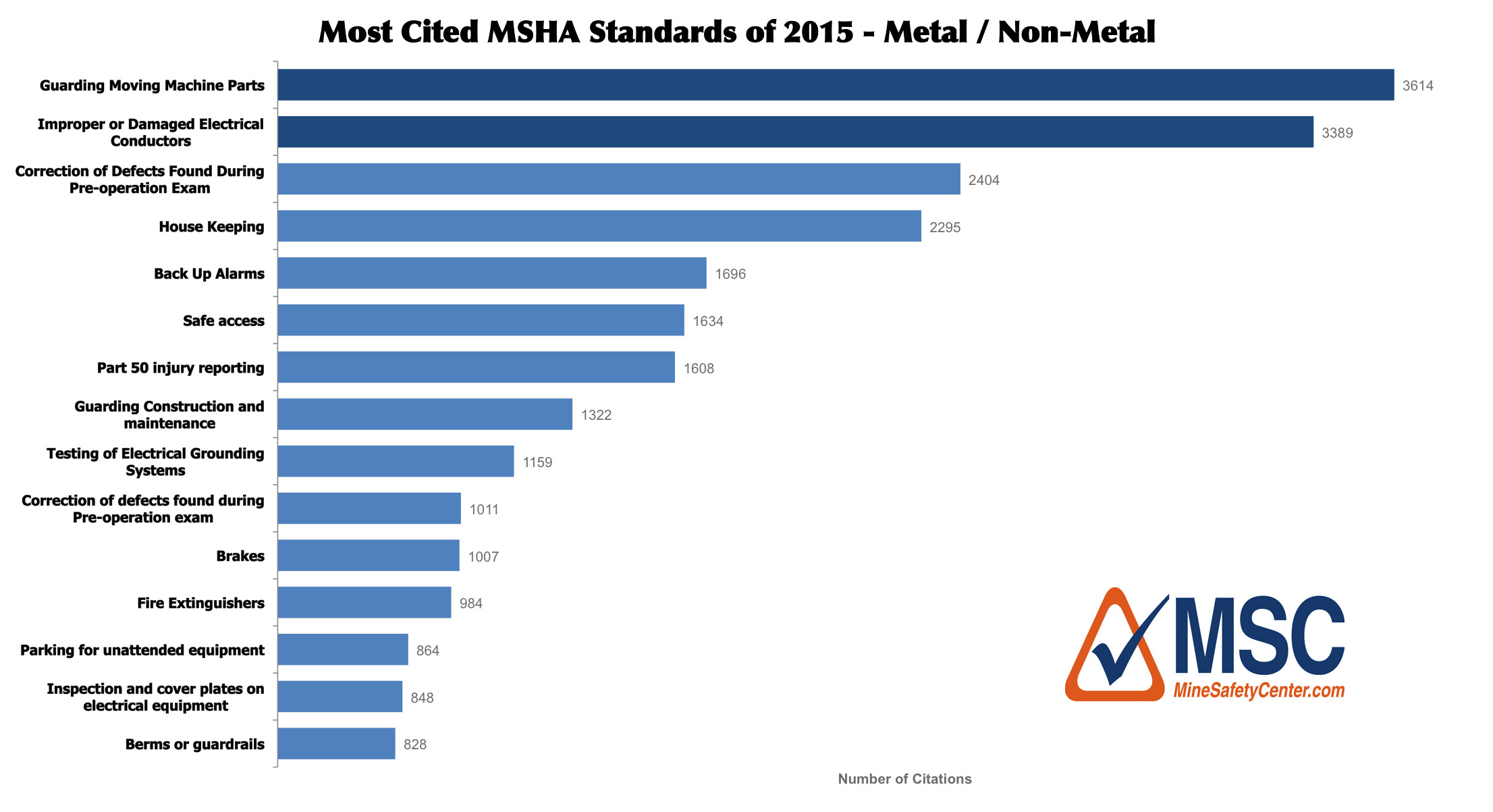 There was only one change in the top 5 from 2014 to 2015. Part 50 injury reporting was replaced by house keeping in 2015. The number of Part 50 citations decreasing is an interesting development considering MSHA announced an increased emphasis on Part 50 reporting.

How Can You Reduce Your Risk of Fines for These MSHA Standards? Let’s go through the standards one by one.

Manually operated horns or other audible warning devices provided on self-propelled mobile equipment as a safety feature shall be maintained in functional condition. 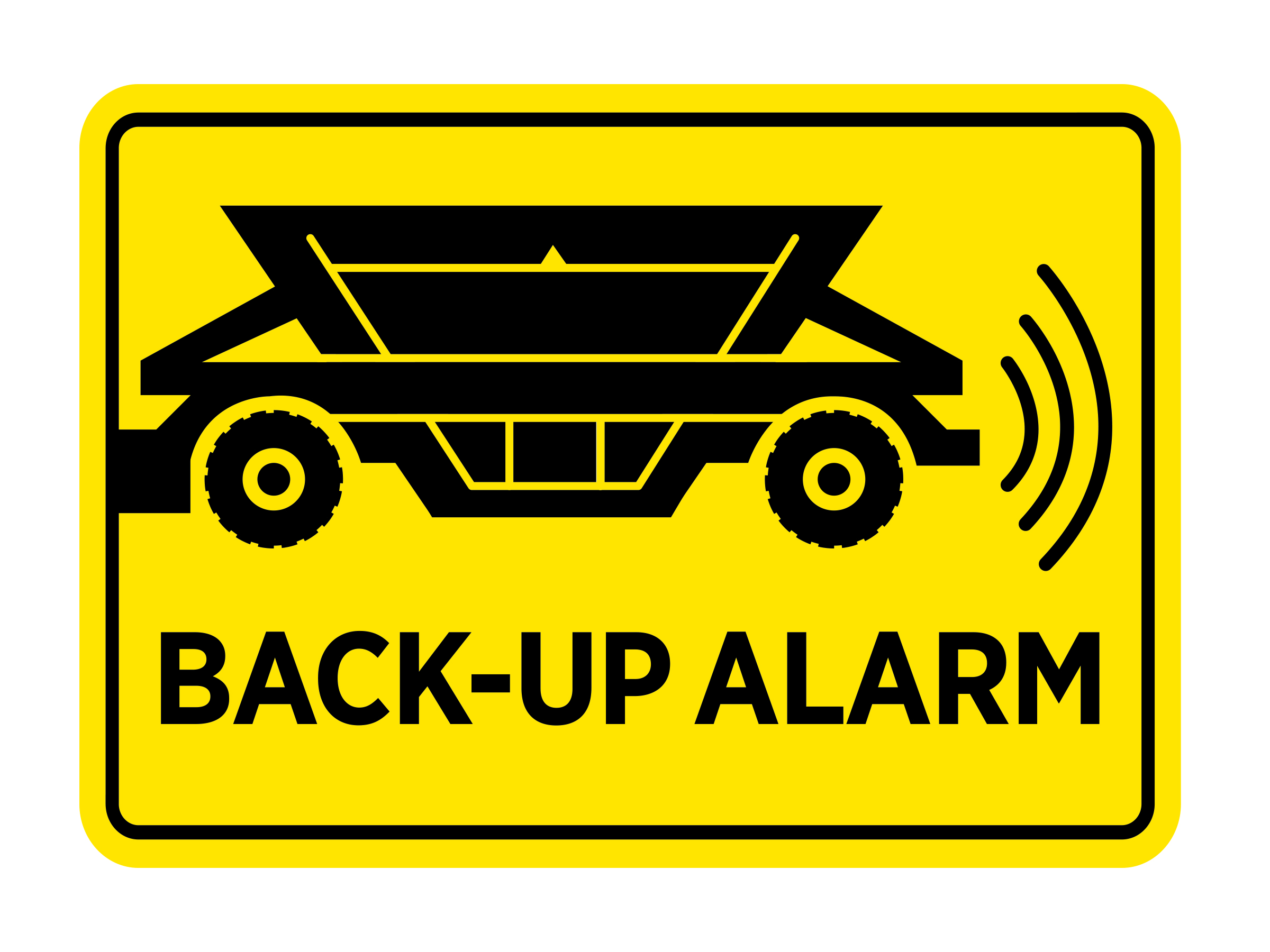 MSHA regulations require back up alarms are functional and must “be heard above the surrounding noise.” That phrase is very subjective and open to interpretation by the inspector. What one inspector would let go another may not. This is where most citations for this MSHA standard are written.

If a back up alarm isn’t operational, by law you can have a spotter as a substitute and still use that vehicle. But the spotter must be with the vehicle the whole time it’s in use. Not a very practical option and certainly not an efficient use of resources.

Back up alarms can cause complacency. We hear them all day long. It can become just another noise in the background. For example in 2004, 14 people were killed in Washington State backing accidents. The back up alarm was fully functional in every incident. The situation was so serious the state legislature passed an emergency law requiring all trucks dumping on construction sites to have spotters.

“The CDL test advocates that over the road trucks should try to minimize backing up, because of blind spots, and potential to hit something or someone,” said former MSHA inspector and Mine Health & Safety consultant Kim Redding. “The best practice to prevent backing incidents and citations is to set up your whole operation so there’s little or no need to back up. Obviously this is impractical or prohibitively expensive for some.”

He continued, “If this option isn’t available, make the danger of backing top of mind at your company. Backing is one of the largest causes of injuries and damaged equipment. Everyone on your site should know and understand they shouldn’t back up unless absolutely necessary.”

Workplaces, passageways, storerooms, and service rooms shall be kept clean and orderly.

This is a very broad standard. You can get a ticket for a disorganized workshop, a messy vehicle cab, even a dirty microwave. Spilled materials are commonly cited under 56.20003(a). Any dust or silica build up can be seen as a trip hazard.

“When I was an MSHA inspector I saw poor housekeeping as a red flag,” said Kim Redding. “If you can’t do the simple things like cleaning up your work place, it’s more likely the big things won’t be done either.”

A clean work environment makes your company safer and more productive. Potential hazards easier for your company to spot and fix immediately when an area is clean and organized. As Jamie Ross of Mining Man puts it “don’t leave a trap for somebody else.” As you walk around your site, take a look for areas that could be tidied up.

Putting an emphasis on house keeping is a simple way to quickly make a site safer and more MSHA compliant. Employees don’t waste time looking for tools and equipment in an orderly shop.

Defects on any equipment, machinery, and tools that affect workplace safety shall be corrected in a timely manner to prevent the creation of a hazard to persons. 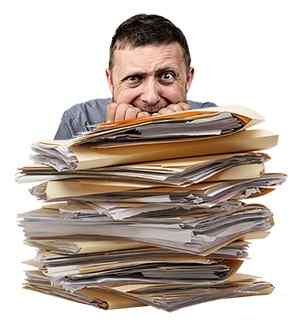 Complying with 56.14100(b) should be straightforward but MSHA has a curveball. Even if you fix a defect you can still get a citation. How? As top mining attorney Mike Heenan said in a great interview with Pit & Quarry, “too often, operators only write down what the problem was, so you have a list of problems without a list of solutions. Maybe the operator has fixed those problems listed, but they might not write that down. You have to finish up the story in writing.” In this situation, some inspectors will write a citation, others may not. It’s up to your operation to take away the opportunity for a ticket. 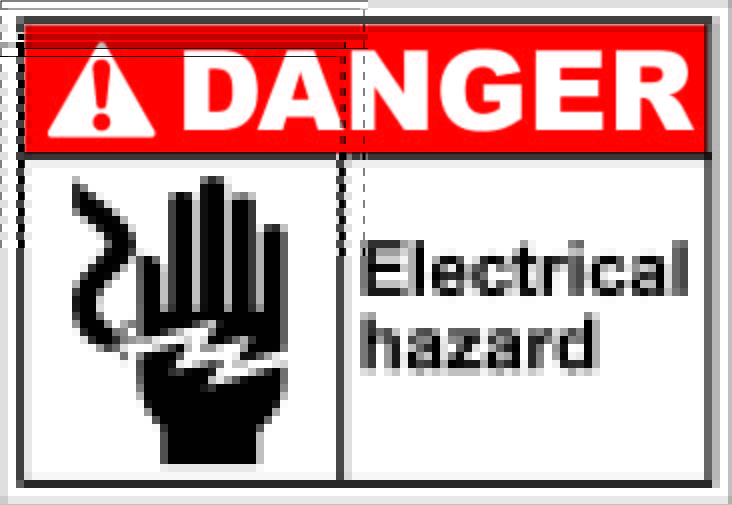 A thorough workplace exam is essential to compliance with 56.12004. Many conductors are exposed to weather, impact, vibration, abrasion, and heat. Inspection of electrical conductors must always be a part of workplace examinations. Schedule inspections on a regular basis for areas of your operation that are less frequently traveled.

If anyone discovers a violation it must be dealt with right away. Many times a health and safety hazard can become part of the workplace if it’s noticed but left uncorrected. It’s human nature. That’s how hazards don’t get fixed and become violations. 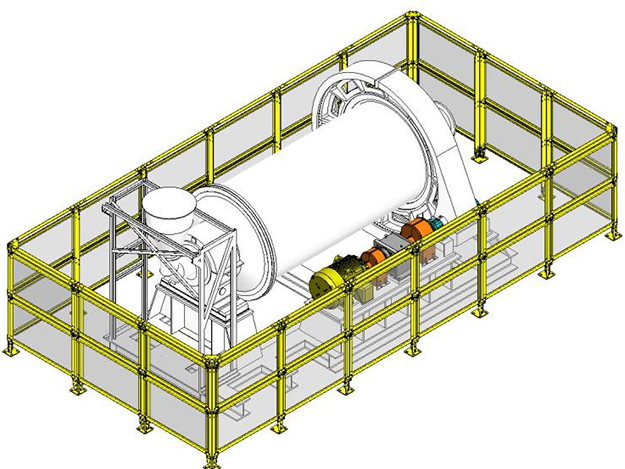 Guarding is by far the most cited MSHA standard and it’s been that way every year for the past decade. Don’t expect that to change in 2016, especially since the first fatality this year was a person killed when they got caught in a conveyor.

There is a clear history of inconsistent enforcement of MSHA regulations. Guarding is particularly hit or miss because the standard is extremely subjective. One inspector may cite you for an area that another inspector has approved for years.

In his interview with Pit & Quarry, Mike Heenan remarked, “It’s amazing to me in all these years that machine guards continue to be up there with other violations. It’s been my contention for a long time that MSHA should spend less time finding citations and instead finding more important things in Rules to Live By.”

“Many times I’ll tell operators their guarding isn’t MSHA compliant,” Kim explains “and they say ‘There’s no way, these are factory guards!’ Just because the guards came from the factory doesn’t mean they’re MSHA compliant. The factory builds on spec. If you don’t specify you want something guarded, they won’t do it. They’re a business that needs to keep their margins up just like you. On top of that, MSHA won’t cite the manufacturer for the violation. It’s your job as a mine operator to request MSHA compliant guarding.”

The best way to protect workers and reduce your risk of citations is to guard all moving machine parts. That includes bolt heads, key ways, couplers, everything. Box in every moving part, everything, so no one can touch, get near a moving part or in a restricted area. MSHA inspectors can and will contort their bodies to show there is a “possibility” someone could be injured.

In the most basic terms, the potential for an MSHA citation exists if an adult sized toddler could touch anything dangerous.

There is a definite trend in the most cited MSHA standards.  Nearly all of the rules are open to interpretation. Every MSHA inspector is different and you may have 2 inspectors interpret the rules in completely different ways.  You can either leave it to the luck of the draw or be proactive and engineer your operation so there’s no opportunity for an inspector to cite you. But you have to make that decision for yourself and your company.

Because they’re cited so much more often, you can get the most return on your investment by aggressively focusing your compliance efforts on the top 5 MSHA standards above.